Saint Teresa's offers a wide range of extra-curricular activities for children to take part in, from regular football matches to dance and gymnastics lessons, peripatetic music lessons and choir to cross country club and races. We take pride in our performances and ensure that we are not a school that is solely focused on academic performance, instead offering a broad and balanced range of activities in which our children thrive.

Year 4/5 Swimming Heat @ Urmston Leisure Centre. Well done, team! Some of our children were recognised for their talent and were asked to train with clubs.

Play Leaders Academy Conference @ Lancashire Cricket Club - our play leaders represented us amazingly, had an amazing day and learned some valuable leadership knowledge/skills along the way. The first photo captured the moment the children met cricketer Robert Peter Jones. Smiles all round! 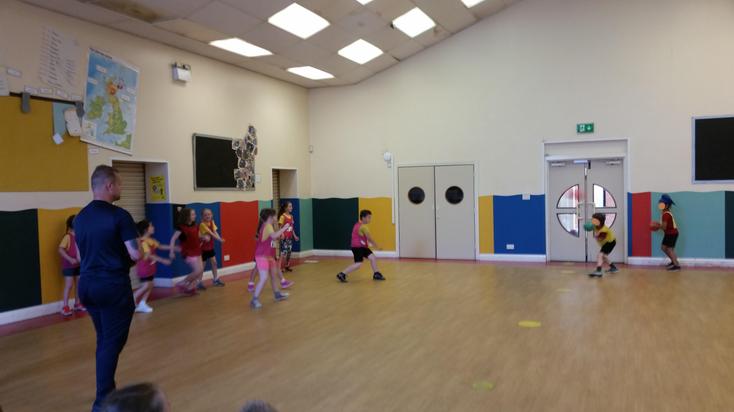 Our Year 3 dodgeball team shown great courage and determination in their first ever dodgeball competition. They were a little nervous at first, but soon got into the game and gave the other teams a run for their money.

Our Year 3s have been left with a hunger for more... watch this space!

Once again, a wonderful day for the Tim Sutton annual tournament. Our St. Teresa's teams represented our school perfectly with our A team making it to the quarter finals.

Thank you to all the parents that supported us and a special mention to Mr Gatter for his great coaching on the day.

Lead by our new captain, St. Teresa's netball team represented our school wonderfully. The competition was tough, resulting in St. Teresa's missing the spot of competing in semi-finals, but we left with smiles on our faces and the team now have that hunger for competition... watch this space! 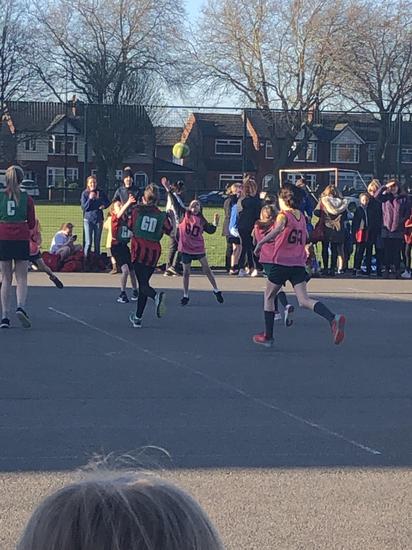 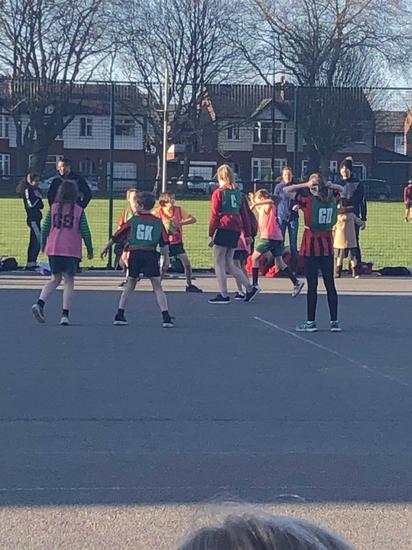 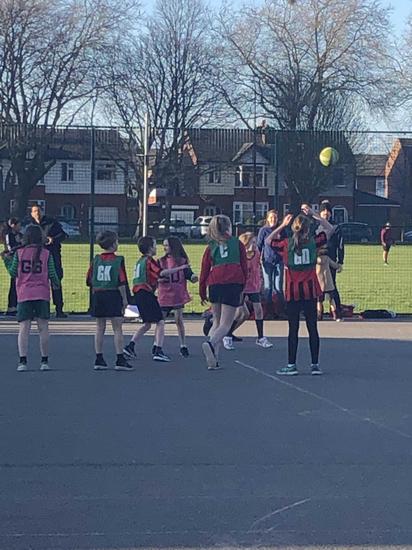 Some of our children attended an inclusion festival at Manor High School. They had a fantastic time and was able to try lots of different sports. A big thanks to the children of Manor High School who supported them throughout the morning.

Year 5 held a hockey competition in their houses for our Nursery, Year 1 and Year 3 children. They definitely modelled many of the School Game values for the younger children and celebrated all the skills they have learned during curriculum time. After a very close call, John were announced the winners. 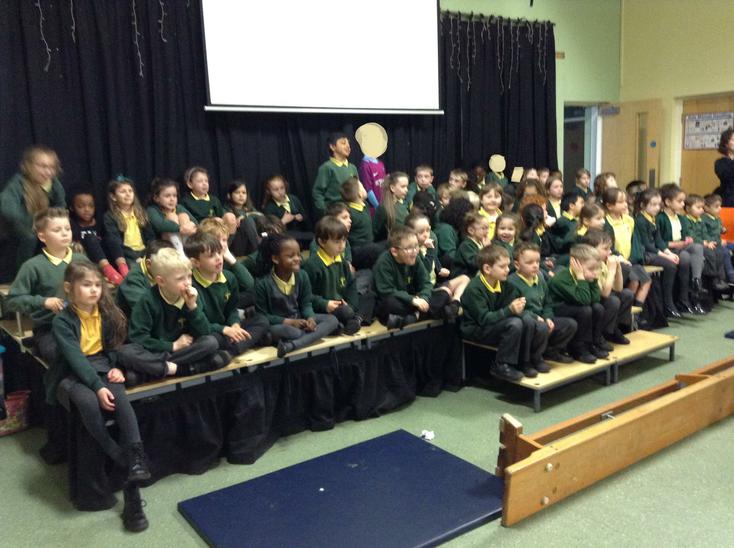 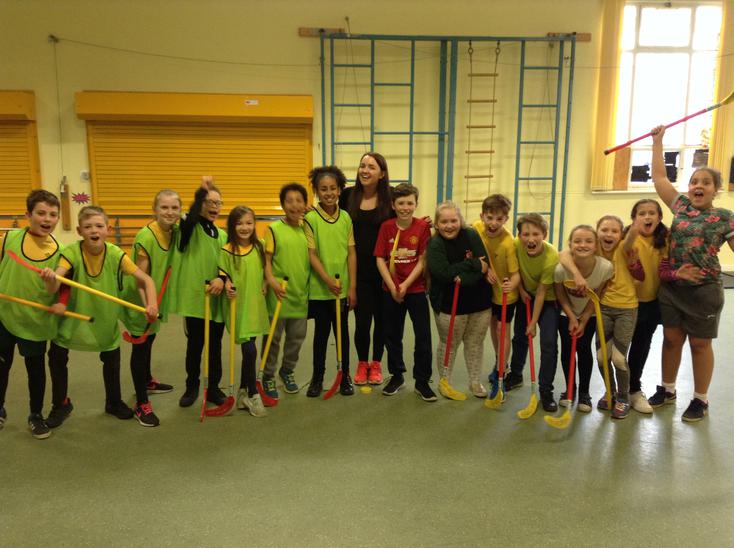 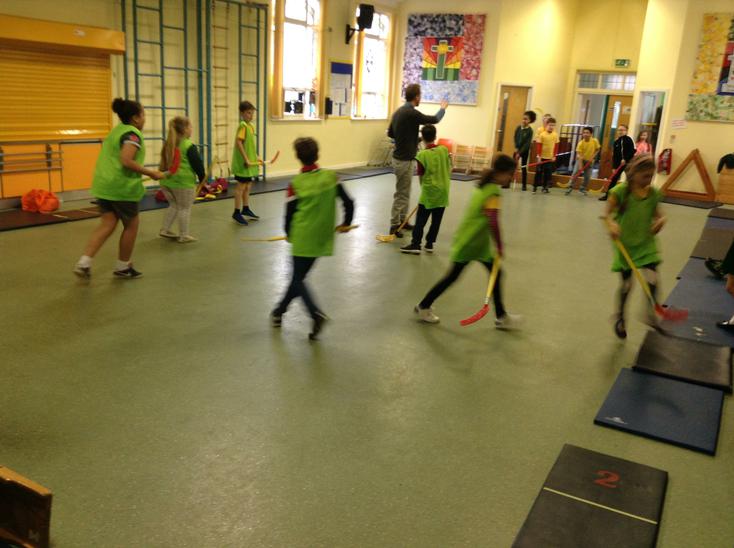 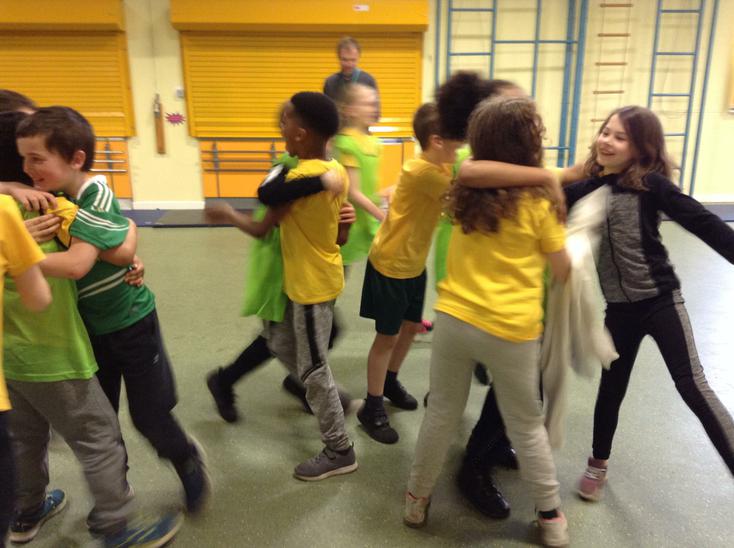 The Year 6s held a dodge ball  competition, showing our Reception, Year 2 and Year 4s how intra school. games are done! All teams shown great teamwork and passion, but only one team could be announced winners of the tournament and that was Mark. 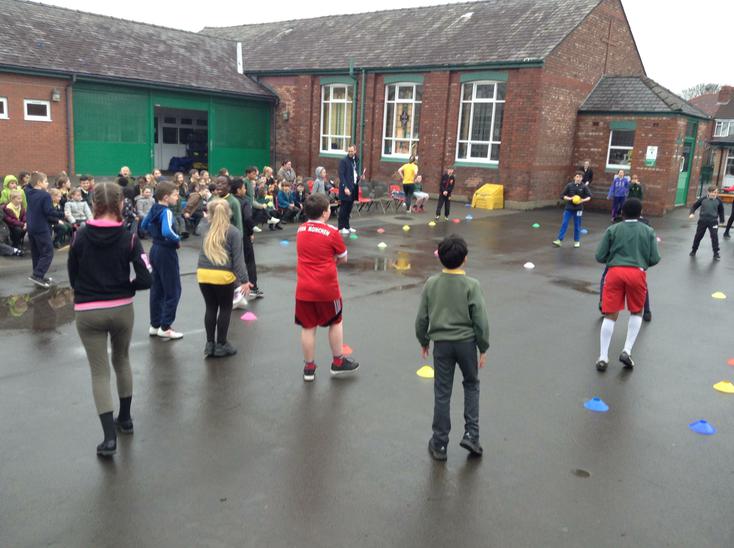 The results from both competitions were combined and our overall winner of the School Games Competitions 2018 were John. They were presented the Mr Tynan's Fair Play Trophy during our School Games Assembly. Well done John! 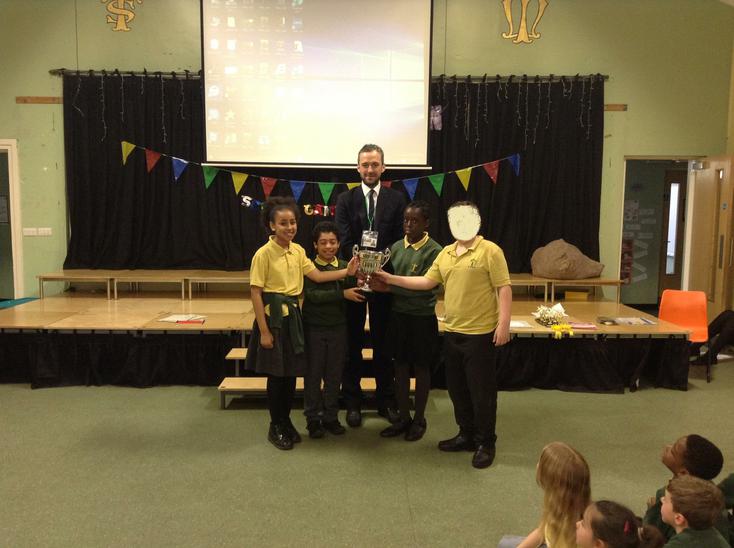 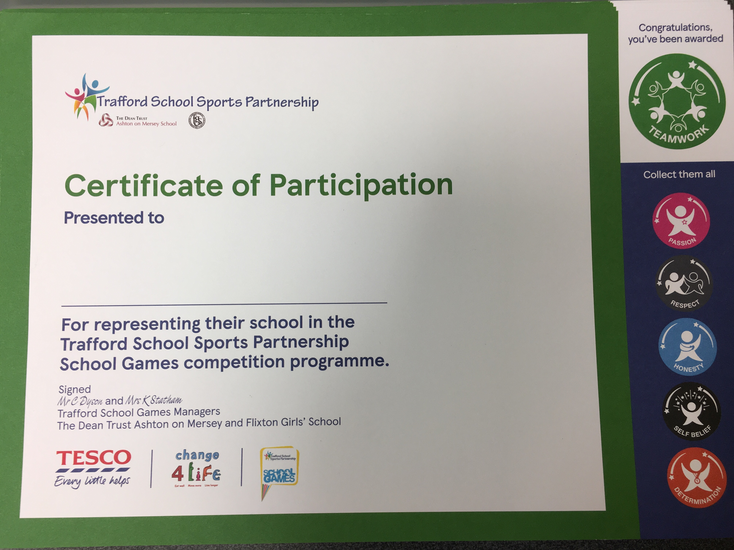 Congratulations to our Year 4/5 contenders in the Trafford School Games Swimming Gala on their excellent performance. They did our school proud by the girls gaining 3rd place in the girls heat (missing second place award by one point), and the boys gaining 2nd place.   The boys will now go onto representing the area in the second heat.

St. Teresa's Primary has teamed up with Manchester United Foundation. Part of this partnership means that, over the Autumn term, we are able to offer 28 lucky children spaces on our Fred the Red Fantastic Fans club.

Every child should be receiving at least 60 minutes of exercise every day. Fred the Red's club will give these children that 60 minutes on Thursdays 3:30pm - 4:30pm. Members from the Manchester United Foundation will be running the activities with Miss Brien supporting. The club is not aimed at a particular sport, but aims to get your child more active and build their confidence.

If you have received a letter inviting you then get yourself down! It is fun, will boost your skills and energy, and we are also expecting a visit from Fred the Red himself! 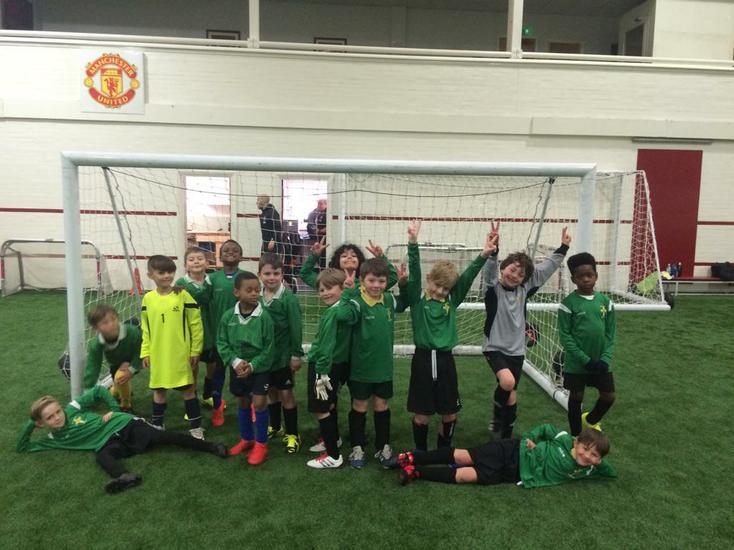 Our Year 2 and Year 3 football teams were in action for the first time this year at the Manchester United tournament at the Cliff.

There were some fantastic performances in the matched including Christian Gatter who scored 17 goals in 6 matches.

Both teams showed great spirit and team work in winning 2, drawing 2 and losing 2 matches which gave both teams an overall position of 3rd in their league tables.  Well done to everyone involved. 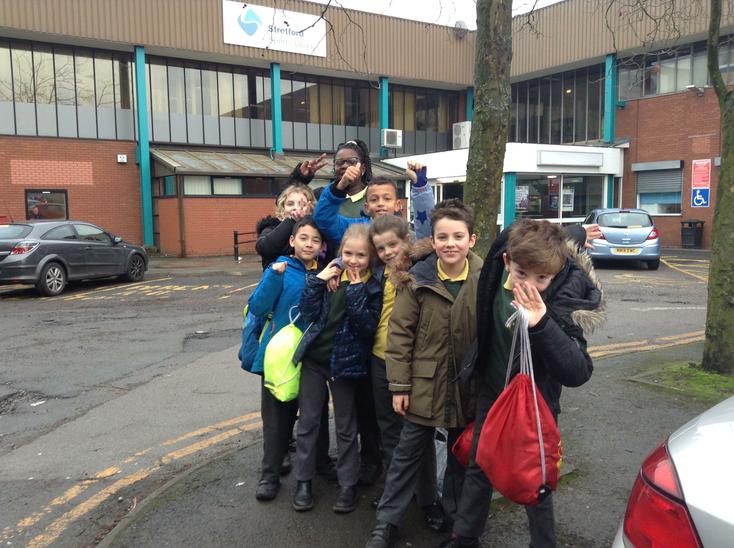 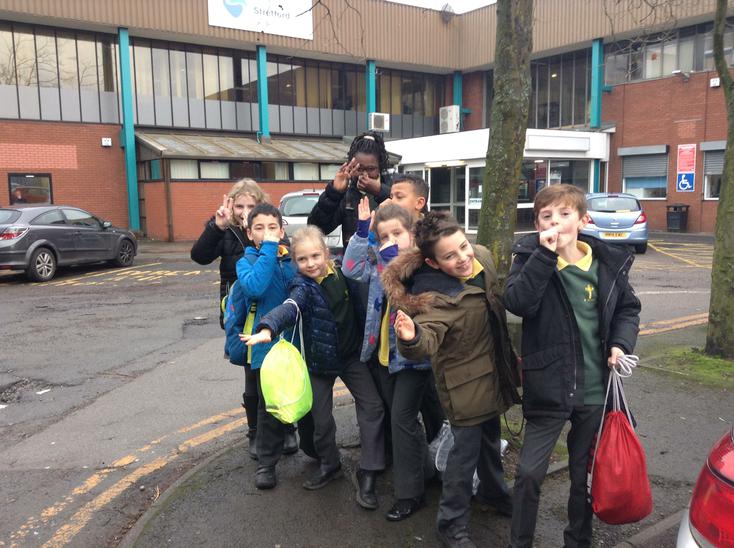 Well, the St. Teresa's swimming team put on a great show at the Stretford Leisure Centre Gala with both the boys and girls team gaining  a place at the Trafford finals on Friday 3rd March 2017 at Sale Leisure Centre.

There were 12 different schools competing at the heats. Each child swimming an individual race and 2 relay races. There were complications during the competition, resulting in one team member being unable to participate, but as always, St. Teresa's pulled it together with both teams coming second.

A big well done to Jessica Tenou and Kirsty Hoy who stepped up to the mark and swam two laps during the girls relay races. 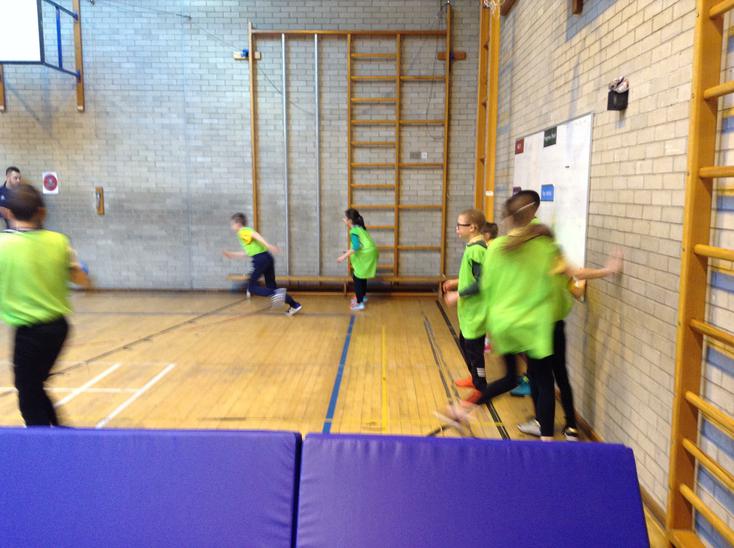 Our Year 4/5 Dodgeball team did St. Teresa's Proud, working as a team to get us into the semi-final and then going on to win in the finals.

The children were delighted to be presented with their winning medals and certificates by sports the coach and the head mistress of St. Anthony's Catholic College.

Unfortunately not the ones with chocolate chips.

Some cookies are necessary in order to make this website function correctly. These are set by default and whilst you can block or delete them by changing your browser settings, some functionality such as being able to log in to the website will not work if you do this. The necessary cookies set on this website are as follows:

Cookies that are not necessary to make the website work, but which enable additional functionality, can also be set. By default these cookies are disabled, but you can choose to enable them below: